A Day At The Movies

I have a couple of videos to share with you on this Christmas Eve, don't worry they are totally geek related. Firstly, I am probably the last guy on the planet to see Tron Legacy but I intend to rectify that over the holidays... I might even see it twice just to make up some geek cred! Along that theme however comes this great Vimeo video of the Tron Legacy themed skateboard half-pipe created by ENESS a group of Interactive designers from Australia.

Tron Legacy Premiere - A Light Session from ENESS on Vimeo.


Additionally for those of you who are expecting Microsoft's Kinect to adorn your household, take a look at the following YouTube video. It seems a group at MIT decided to hack Kinect and create a Minority Report style GUI which is very impressive... I believe Steven Spielberg himself would be impressed!

Enjoy, and have a safe and happy holiday season with lots of gadgets under the tree.
Posted by greatbiggeek at 7:27:00 AM

What's In A Number?

MATT RICHTEL in the NYTimes Bits Blog points out that the amount of time spent using web based email services is on the decline for everyone but the 55 and older crowd. The data collected by comScore Media Metrix should, in my opinion, come as little surprise to anyone with a pulse. The proliferation of social media sites as a means of communicating has drastically reduced the amount of general chatter that once occupied our in boxes. Many people have chosen to fulfill their need to reach out and touch their "friends" via Facebook status updates and wall posts. I believe that this form of communication is much more of a fishing expedition; if I have 200 friends on Facebook and I post that I'm feeling happy today, or sad, I'm more likely to engage someone in a conversation. Instant messaging, texts, twitter or Facebook posts make for instant gratification, and the generations that are growing up today are less likely to want to engage in lengthy email exchanges. The move to mobile has also had a significant impact on our email habits, and while the numbers are interesting to look at there's little to be surprised by here... unless you are a web based email service who's not had social on your radar, then you're probably too late anyway.
As for the big split between the under 55's and the over 55's, these are mostly the folks who didn't have PC's in their everyday lives until they were pushing 30 and probably didn't have to embrace them until even later in life. It's not that surprising.
Posted by greatbiggeek at 7:58:00 AM

Google to the rescue once again. This Google fan boy applauds the fact that Google is serving up some more great stuff with word from the Official Google Blog that a new notification is being delivered with your search results.
"We've added new notifications to the results page to warn you when sites may have been compromised, spammed or defaced. We use a variety of automated tools to detect common signs of hacking as quickly as possible, and if we detect any of these we add a new notice right beneath the result title line, “This site may be compromised.” In addition to protecting users, these notices will also help webmasters more quickly discover when someone is abusing their sites. You can learn more in our Help Center article and our webmaster blog post."
The results will look something like this: 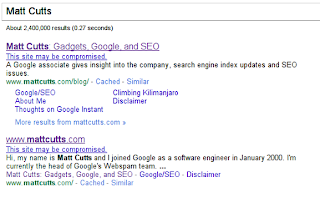 Thanks Google!
Posted by greatbiggeek at 7:30:00 AM

For about 30 Minutes the worlds largest social network was offline after releasing code to the public that was not quite ready for prime time. The Facebook blog described the situation as such: "For a brief period of time, some internal prototypes were made public to a number of people externally. As a result, we took the site down for a few minutes. It's back up, and we apologise for the inconvenience."
Wired.com's Sam Gustin says "They're not pleased that they had to shut the website down for 30 minutes," "But it comes with the territory when you have a culture of iterative innovation, they say," he said. "Sometimes code gets pushed out before it's ready."
All of us in the software biz can feel their pain, it's especially difficult when you have the number of users that Facebook has, one can only imagine the financial loss that being offline for 30 minutes brings for a behemoth like Facebook.
Source: bbc.co.uk
Posted by greatbiggeek at 7:26:00 AM

North Americans will have the best seats in the house on Tuesday as the winter solstice and a total lunar eclipse colide for the first time in 456 years, the last time being in AD 1554.

The arrival of the winter solstice cannot be seen, but is described as the instant when the Earth's axial tilt is farthest away from the sun, resulting in the shortest day of the year as well as the longest night of the year. The summer solstice happens in June when the reverse is true.

NASA predicts that at 1:33 a.m. ET on Tuesday, "Earth's shadow will appear as a dark red bite at the edge of the lunar disk." After aboun an hour, the "bite" will  grow to cover the entire moon. This stage, known as "totality," will probably start at 2:41 a.m. ET and last 72 minutes.

NASA suggests the best time to view the event, will be at 3:17a.m. ET, "when the moon will be in deepest shadow, displaying the most fantastic shades of coppery red."

I might be a little groggy at work on Wednesday!
Posted by greatbiggeek at 10:17:00 AM