My home/home office is wired more than the average abode. We have four (4) pc's, a laptop, printer, scanner, Xbox 360, etc... all using a combination of wired and wireless connectivity to our home network. While many of these devices are scattered around the house, my small home office (12 x 8 feet approx. and not currently uncluttered enough to post a picture) holds a lot of gear. I never seem to have enough desk space and with two pc's, one for development and the other for testing, I was challenged to find a practical solution to accessing both machines without sacrificing more desk space or performance. I realize that in a networked world Remote Desktop is an option but I don't have the patience to suffer through the lag time... I know, I should slow down but it's not in my nature.

Enter the 2 port IOGEAR MiniView™ Micro PS/2 KVM Switch. This neat little switch provides the perfect home/office solution. It's small, responsive, and easy to setup and use. For those not familiar with these devices a KVM (keyboard, video, mouse) switch allows you to connect a single keyboard, monitor, and mouse to be switched to any of a number of computers. In the case of the Miniview, 2 pc's to a single keyboard/monitor/mouse using the ps/2 style connections. Navigating between systems requires a simple double tap of the Scroll Lock key, there is also a monitor function which when engaged flips focus from one system to the other, though I have not personally found a practical use for this. I also considered another slightly more expensive KVM which came in a USB configuration and supported audio, but ultimately chose the Miniview as I don't anticipate audio being a requirement and didn't want to spend the extra cash. 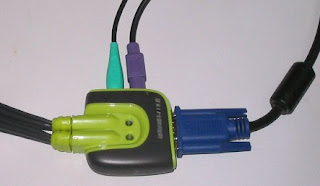 The switch provides more desk space and saves the cost of multiple keyboards and monitors. For those unfamiliar with these devices, they are commonly used in IT departments where generally one user is accessing multiple servers from a single location. The commercial versions can control 8 or more devices and can cost in the thousands of dollars. Luckily for us the IOGEAR Miniview is under $100.00. According to their website the MSRV is $39.95 US, but I paid a bit more than that at the local big box retailer (should have checked the website first). View specification here.


Now you might ask why would I want two pc's? Well, consider this the next time you purchase a new system. Rather than giving the old clunker away, add it to your network as a file share . With no shortage of mp3 players and digital cameras all competing for storage space, an extra networked hard drive can be just the solution for backing up and sharing all those jpeg's and mp3 files! That sounds like a topic for another post...

How geeky is this? I was trying to decide between a number of topic ideas that I have been bouncing around when a new one came to me, straight out of the bank machine. April is tax time here, and since I was expecting a return I e-filed early. Today I was in the city and on a whim decided to check my account at the ATM to see if the deposit had been made yet. Since it had (cha-ching) I withdrew a few dollars before heading to the big box electronics shop.

One of the bills had hand writing on it which caught my eye. Normally I would ignore such markings but this one jumped out at me. Neatly printed on the bill was "Follow my journey - online! www.whereswilly.com"URL and the bill's serial number was circled. With an like that I was a little concerned that the link might take me to a site of questionable content, but curiosity got the better of me.

Much to my joy the site actually allows you to trace the wanderings of your money before it reached your hands and, if you play along, after it's long spent. I've seen similar sites such as http://www.bookcrossing.com/ which is a free book club that allows you to track the travels of books that you've read. The idea is to leave the book in a public place with directions to their site for journaling it's travels. The really geeky part of this story however is what happened when I was putting this post together. Without really thinking much about it, I decided to scan the bill and post the image with the article. My trusty HP Officejet 6210 All-in-One gladly complied but when I tried to save the image to jpeg format, using Paint Shop Pro, I received the following message: "This application does not support the unauthorized processing of banknote images. For more information, select the information button below for Internet-based information on restrictions for copying and distributing banknote images or go to www.rulesforuse.org.".

rulesforuse.org provides guidelines for the use of images of currency and links to the appropriate governing bodies, according to where you live. I hope the Bank of Canada will approve of my alterations to the image included herein, in the interest of time I've done my best to render the image unusable for nefarious purposes... though I haven't requested the appropriate permission, yet!
Posted by greatbiggeek at 12:26:00 PM

Like most true geeks, I have a flickr account, well two of them actually! For those of you who have been hiding your heads in the sand for the last few years, flickr is "the" photo sharing site. I love it because it's a Canadian success story, it's very easy to use, and its largely credited for popularizing the concept of tagging content on social networking sites.

Most of the pictures I upload are private, for family and friends only, but I have published a few pics to be viewed by the public. I do enjoy taking pictures but I've never considered myself much of a photographer, and I take far fewer pictures than I should. The ones that I have released to the public are mostly shots that I consider reasonably interesting for any number of reasons. Generally they are of places I've seen and usually they don't include family members.

Imagine my surprise when I received an inquiry from McGraw-Hill this week regarding a photo I uploaded to flickr almost two years ago! The photo, included below, is one that I shot of my youngest son skateboarding at the local skate park. I was particularly proud of this shot because it was an action shot that was framed reasonably well, free of blur , and by chance, featured some graffiti art. As it turns out, the photo editor who contacted me is working on a mathematics text book and wanted to use the image as a "Unit Opener" in the book. In the interest of curiosity, I asked her about their flickr trawling practices! She informed me that

We generally try to obtain images from stock sites, but on occasion we can't find what we need and we search elsewhere. The only thing about sites like flickr is that, on occasion, the images are not hi-res, or we never hear back from the people we contact. 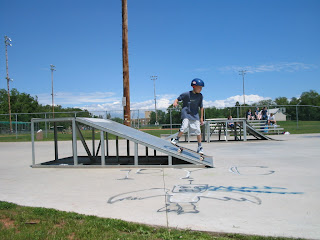 Just goes to show that you never know who's watching you online! As for fame and fortune… I’ll be receiving a credit in the book and a copy to show off to friends and family when it’s published. Very cool!

p.s. I'm still using the Canon PowerShot A300 that I used to capture this shot, it's a 3.1 megapixel point and shoot style camera. While it does the job, I've been longing for something more feature packed for some time now. Perhaps I'll get the okay to buy something more sexy now that I'm going to be a published photographer!