Microsoft has banned as many as 1 million users consoles from the Xbox Live service for having modified consoles which allow them to play games they have copied. The users themselves have not been banned, only the modified consoles, users can play on the service if they purchase a new unmoded console. "We can assure you that if an Xbox Live member follows the Xbox Live terms of use, purchased a retail copy of Modern Warfare 2 and played the game on an unmodified Xbox 360, no action will be taken," the firm said. I wonder why it's taken them this long to take such actions?

Trying to make further gains on the two search leaders Google and Yahoo!, Microsoft's Bing team have announced the inclusion of results from Wolfram Alpha and a few other changes. According to the NYTimes Bits Blog "Over the next few weeks, Bing will also add a handful of other features and revamp existing ones in what Microsoft calls a “rolling update.” They include localized results for weather and events, a revamped shopping section and an updated preview feature, which lets users see a snapshot of a Web page directly on the search results page. A video describing each of the features is available here."

Even so, it will be a hard slog for Microsoft.
Posted by greatbiggeek at 7:23:00 AM

The holiday season is officially underway with the release of what is expected to be this years blockbuster game, and maybe the biggest selling game of all time. Tuesday was the launch of Call of Duty: Modern Warfare 2, the must have game for this holiday season. The fifth game of the console series has been highly anticipated and will likely show up under a lot of Christmas tress, if anyone can wait that long. The game industry however has not been immune to the global economic downturn as many believed it would be and is starting to feel the pain. Game developers are saying that they will be aiming for more spread out release dates in the coming year, rather than focusing solely on the holiday season. Most of us will be glued to the consoles and won't notice a thing, there is nothing like COD on an HDTV with the surround sound cranked!

A self-propagating program believed to be the first iPhone worm, that changes an iPhone's (or iPod Touch's) wallpaper to a picture of Rick Astley with the message "ikee is never going to give you up", has been unleashed in Australia. Known as "ikee" the worm only affects devices that have been jail-broken, have had SSH installed (a program that allows users to make changes to the phone's file system), and who's owners have not changed the default root password after installing SSH.

"What's clear is that if you have jail-broken your iPhone or iPod Touch, and installed SSH, then you must always change your root user password to something different than the default, 'alpine'," wrote Graham Cluley of security firm Sophos.

"In fact, it would be a good idea if you didn't use a dictionary word at all."

I'm back! The people of Rankin Inlet are certainly a tough breed, I would never be able to stand the conditions under which they live. Perhaps I'm just soft from living South of the treeline but wow! Thirty below most of the time I was there and winds to boot. On Friday awoke to blowing snow which had the locals abuzz, they cherish their winter months the way we cherish summer. Had a warm reception at the airport when I arrived, met by two folks representing our client, and the lodge keeper. If you ever find yourself in Rankin, stay at Nanuq Lodge... trust me, it's an experience you'll not forget. Sorry for not posting but the internet connection was slow at best, dare I say less than dialup.
Thanks goes out to Page, Annamarie, Brad, Cindy, Jim, and the folks in the office for making the trip comfortable and productive. 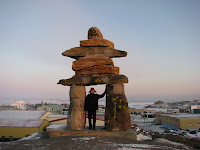