Scientists On Path To Reading Your Mind With Brain Scans

Scientist at the University of California, Berkeley have made strides toward being able to read a human's mind. They Have successfully modeled how images are represented in the brain, and can now translate recorded patterns of a subjects neural activity into pictures of what the subject had seen.

The research could conceivably lead to dream-readers and thought-controlled computers according to a Wired article. "It's what you would actually use if you were going to build a functional brain-reading device," said Jack Gallant a neuroscientist working on the project.
Posted by greatbiggeek at 9:25:00 AM

With over 50 million users Twitter is poised to close another round of financing this time for $100 million placing the value of the 3 1/2 year old startup at $1 Billion. Have a listen to this NYTimes piece on the state of Twitter and the valuation.
Posted by greatbiggeek at 7:56:00 AM

Canadian Businesses Not Using Webs Marketing Potential To It's Fullest

When it comes to online advertising Canadian businesses are lagging their counterparts in the developed world according to Google's number 4 man. "It's not as competitive a business market, which basically suggests that there's not as many businesses online because they're not competing for more share amongst each other or there are not enough businesses competing in certain areas," said Nikesh Arora, Google's president of global sales operations and business development. Arora added "Based on the technological savvy of the market, [Canada] should be in the top quartile." He's probably right, but then again Google is in the online advertising business and, according to his title, Mr. Arora is getting paid to sell us on the virtues of online advertising.

Yahoo! Gets A Face Lift - Nobody Seems To Care?

It's a slow news day when the biggest story seems to be Pee-wee Herman's press conference featuring his first tweet... so it surprised me to see that only one of the feeds I regularly check, BBC.co.uk, was reporting on the refresh of the Yahoo! portal and a $100 million global ad campaign to support it. Has Yahoo! fallen so far out of the public's attention that it can't even attract a little link love from the blogoshpere? Good luck with that ad campaign Yahoo!

Roddenberry's Apple Macintosh Plus Up For Auction

The first Apple Macintosh Plus to roll off the assembly table, serial number F4200NUM0001, was apparently given as a gift to Star Trek creator Gene Roddenberry. While no one knows whether or not he used the little mac to create any of his works, the machine is being offered for auction on October 8th and 9th. The auctioneer, Profiles in History, is expecting to fetch between $800 and $1200 but if the buzz is any indication I'd expect to see it go much higher.

cnet's Technically Incorrect blog
Posted by greatbiggeek at 7:19:00 AM

Viewing The Worlds Glaciers - From Space

The good folks at Wired's Wired Science blog have compiled a collection of images, captured from space by astronauts and satellites, of some of the worlds most impressive glaciers. "To a geologist, glaciers are among the most exciting features on Earth. Though they seem to creep along at impossibly slow speeds, in geologic time glaciers are relatively fast, powerful landscape artists that can carve out valleys and fjords in just a few thousand years."

Here is one from the collection. "Covering nearly 1,400 square miles, the vast Heiltskuk Ice Field lies in the southern Coast Mountains of British Columbia. Taken by an astronaut on the International Space Station, this photo captures the snow-covered mountain slopes as well as several of the ice field’s valley glaciers, which are wide swaths of slowly flowing ice and debris." 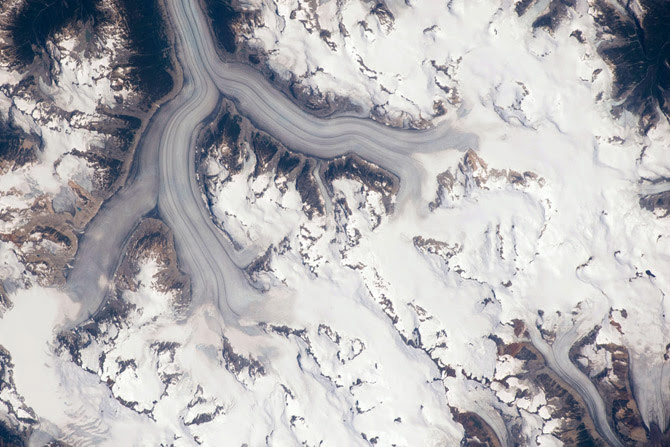 Google docs To Be Spidered, If Published By Owner

A recent post in the Google docs help forum states "In about two weeks we will be launching a change for published docs. The change will allow published docs that are linked to from a public website to be crawled and indexed, which means they can appear in search results you see on Google.com and other search engines." This has a few users concerned about the security of their online docs to which Google says "Please note that this only applies to docs which you explicitly publish using the 'Publish as web page' or 'Publish/embed' option, and which are linked to from a publicly crawled webpage. This doesn't apply if it's only set to 'Allow anyone with the link to view (no sign-in required)'."

The following steps can ensure that your docs are safe from the spiders, if that is what you intend:

-Go to the 'Share tab'
-For documents and spreadsheets, choose 'Publish as web page'. For presentations choose 'Publish/embed'
-Click on the button that says 'Stop publishing'

This will have to be done for each document, though if you had set a document to be published then one would assume that your intent was to have people view it anyway, and having the search engines spider it's content may provide you with greater exposure to your works.
Posted by greatbiggeek at 10:14:00 AM