An unpopulated, one house, 13 acre town in Texas was recently auctioned via eBay with the winning bid coming from Italy. The town of Albert, about 60 miles north of San Antonio boasts a tavern, created from the frame of the old general store, a pavilion, an 85-year-old dance hall, a tractor shed, a three-bedroom house, plus peach and pecan orchards. The current owner is not jumping for joy yet as he has not verified that the $3.8 million bid is legitimate.
Posted by greatbiggeek at 4:29:00 PM

Email ThisBlogThis!Share to TwitterShare to FacebookShare to Pinterest
Labels: ebay

One Laptop Per Child "Give one, Get one" program extended

The OLPC 'Give one, Get one" program appears to be a success with the organization extending the program until the end of the year in order to allow more people to participate. "In the past 10 days, we've experienced an outpouring of support from the public that is truly gratifying and encouraging," said Nicholas Negroponte, the program's founder. "so many people have asked for more time to participate either individually or in order to organize local and national groups to which they belong." says Negroponte. The CBC has more here.
Posted by greatbiggeek at 11:01:00 AM

Activision sued by rock band because Guitar Hero cover is too close to the real thing!

Even though they secured the right to make a cover of The Romantics song "What I Like About You", Activision, the makers of Guitar Hero III is being sued because the band believes the cover version is too close to the real thing. According to this USA Today article "The band's attorneys said Activision properly secured permission to use the song What I Like About You, which allowed it to record a cover version. But by creating an imitation so much like the Romantics' original, they said, the company has infringed the group's right to its own image and likeness." If this one passes you can bet there will be a few more lawsuits, those covers are extremely good!
Posted by greatbiggeek at 12:37:00 PM

A party photo contest for university students on Facebook is being called irresponsible and university officials are suggesting that the brewery is either unaware of the potential danger "or simply placing profits above ethics." The Globe and Mail is reporting about the initiative by Molson Coors Brewing Co. that has university officials across Canada fuming. Joe MacDonald, dean of students at St. Francis Xavier University says “These kinds of programs put added stress on our ability to ensure that students have a very positive, successful academic and non-academic development.… This is not something that is welcome within our campus community.” Beyond the obvious potential for harm that ensues when partying gets out of hand, the schools are also concerned that the images could be "harmful for students seeking jobs if a potential employer discovered their raucous partying poses on Facebook."
Posted by greatbiggeek at 6:49:00 AM

TechCrunch is reporting that user data suggests that nearly 2/3 of all Facebook users are female. Research conducted by blogger Paul Francis says that there are nearly 43 million users world wide and that only 36% are male. The US has the largest user base followed by the U.K., Canada, Australia, and Turkey. Not sure how accurate the data is but interesting numbers if they are true.
Posted by greatbiggeek at 12:54:00 PM

California DMV turns to YouTube to get it's message out

Someone at the California DMV is thinking! The government agency responsible for motor vehicle safety and driver training has decided to target the places young people hangout... YouTube and MySpace. “We are always looking at ways to reach people, teens especially,” said department spokeswoman, Jan Mendoza. “And let’s face it, the Internet is huge. We thought it would be really cool since YouTube is free.” What impresses me about this is that here is a government agency that has decided to use technology to it's advantage without investing $ millions building something that nobody will use. Far too often IT departments feel as if they have to own the technology, and that's a little bit self serving in my opinion. Of course we are not talking about sensitive data here. The New York Times has the story.
Posted by greatbiggeek at 7:14:00 AM

Putting his AI abilities to good use, Russian Igor Suslov, a physicist at the Kapitza Institute for Physical Problems in Moscow, is trying to create a computer based program that has a sense of humor. According to the Telegraph, Suslov "thinks he sees at least the broad outline of how humour works" based on "his mathematical model, which traces our ability to experience humour to quirks in how the brain handles information". In an interview with New Scientist, Suslov says humor's "... biological function, is to make brain operations more efficient." hmmm... there has to be a joke in this somewhere!
Posted by greatbiggeek at 7:05:00 PM

Wired has compiled a geek gift giving guide just in time for the holiday season. From "Dead Blow" hammers (I love that name) for the weekend handyman to the new HP Photosmart A826 Home Photo Center! There is something for everyone on your shopping list. This has inspired me... think I'll compose my own list, stay tuned.
Posted by greatbiggeek at 7:21:00 AM

It seems as though our appetite for high bandwidth data is growing and at a rate that is out pacing the infrastructure or so says US analyst firm Nemertes. A study produced by the group "predicted a drastic slowdown as the network struggles to cope with the amount of data being carried on it" according to the BBC. The report suggests that tens of Billions of dollars are required to head off the impending doom and that the real cost will be associated with the stifling of innovation. "The report is part-funded by the Internet Innovation Alliance (IIA) which campaigns for universal broadband in the US." Perhaps that explains it! Not that I wouldn't want to see more broadband, bigger capacity, etc., just that I'm a little skeptical of a report funded by a lobby group...
Posted by greatbiggeek at 12:22:00 PM

In another coop for mankind, researchers at the Free University of Brussels have programmed tiny roach robots to infiltrated the cockroach community! According to the CBC "The robots didn't look like the insects and at first the roaches fled from them, but after the scientists coated the robots with pheromones that made them smell like roaches, the machines were accepted into the group, nesting together with the insects." I guess we'll be ready for those alien bug invaders after all!
Posted by greatbiggeek at 7:33:00 AM

Is Google after Skype?

According to The Guardian Google is in talks with eBay to buy Skype! Well, that's what the rumors circulating London say... and according to OM Malik the Skype spokespeople are not commenting. I guess with all of the interest in telephony these days at Google it's not a big stretch of the imagination to speculate on this deal, and they do have the cash to make such a purchase happen. Can Google succeed where eBay has failed? Time may tell...
Posted by greatbiggeek at 12:27:00 PM 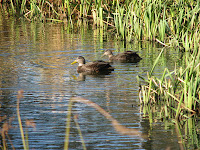 In preparation for our trip South, and as a birthday gift from the family I recently received a new toy that I'm thrilled with! Previously I had a point and shoot 3.1 Mega Pixel Canon AS-200 digital camera, and while I was generally happy with it I found myself longing for more features and better quality shots, particularly in the zoom department. After much research, and a lot of wavering back and forth, I decided upon the Canon PowerShot S5 IS. It's not quite a digital SLR but offers a respectable 8 Mega Pixel resolution, 12 X optical zoom, facial recognition (up to 9 subjects), and many manual settings as well as fully automatic mode, all for around $450. On top of this there are available lens adapters, including a wide angle or telephoto lens that can be added to round out the options and bring this camera a step closer to the DSLRs. There is a video mode which, unlike many others, allows you to zoom while filming and many settings that I'm just learning to use. I'm really enjoying this camera.
Posted by greatbiggeek at 4:38:00 PM

A nice gift for the wine geek.

If you have a wine lover who's also a tech geek I'm sure they will be appreciative of this little USB thumb drive from bewineconnected.com. Not only is it shaped like a wine bottle but it's packed with wine related info, ringtones for your cellphone, and an application for managing your wine cellar! At 35 Euro it's a little pricey for a thumb drive, but considering the information provided it may well be worth the purchase. The Open Cellar application is available here for free, but package it all up nicely in a cute little thumb drive and I'm sure your wine collector will love it. Thanks to Emmanuel Etcheparre for sending me this link.
Posted by greatbiggeek at 8:50:00 AM