College Coaches to Vote on Texting as a Recruiting Tool

College basketball is competitive on many levels, least of which is the recruitment of top ranked high school players. For many coaches trying to recruit, text messaging or texting has become a valuable tool which reaches the young stars in a manner that they are familiar and comfortable with. There is a fine line however and some students have begun to complain that all of the messages are costing them time and money leading the N.C.A.A. to put a ban on the practice for Division I colleges last August. Today during their annual convention, representatives from the N.C.A.A.’s Division I members are expected to revisit the issue after 34 of the 329 colleges asked for an override vote. Some are suggesting that governing body reinstate the practice but put restrictions on the use of texting similar to those imposed on placing phone calls to the recruits. What an interesting dilemma! Sort of like that which we all face when we get those annoying telemarketing calls, only for these kids there are real benefits to staying in touch with certain coaches while others with whom they have no interest still want to be heard. The New York Times has the story here.
Posted by greatbiggeek at 11:22:00 AM

British Schools and Colleges Being Advised to Stay Clear of Vista

According to InfoWorld, the British Educational Communications and Technology Agency (BECTA), the agency that is responsible for advising educational institutes in their use of IT, British schools and colleges should avoid Microsoft Vista and Office 2007 unless they are rolling out all-new infrastructure. "We have not had sight of any evidence to support the argument that the costs of upgrading to Vista in educational establishments would be offset by appropriate benefit," the agency said in a report (pdf - download). The report also calls on schools to educate teachers, parents and pupils about free alternatives to Microsoft's products, and asked the IT industry to facilitate their use. Geeks rejoice! We're not alone in our thinking anymore...
Posted by greatbiggeek at 2:48:00 PM

Online video sites are seeing huge jumps in traffic from the US this fall and speculation is that the writer's strike is driving the surge. YouTube's numbers are up and new comer, Crackle, has seen it's numbers double since the strike began. "That is greater growth than you would normally see in such a short period and the strike could be a possible factor," Nielsen analyst Alex Burmaster is quoted as saying in this BBC article. Other things to consider are a 9% increase in high-speed connections at home in the US, where 54% of adults report having high-speed. I'm thinking that the Television networks had better take notice, as TV has already fallen out of favour with the younger crowd. I'd estimate that my teens already spend much more time on the PC than they do watching television, while it's generally on it usually is only background noise... their attention is primarily on the computer monitor. A prolonged strike may do irreversible harm to what is suspect are already dwindling ratings within the under 30 demographic.
Posted by greatbiggeek at 7:59:00 AM

According to this CBC report, "Intel Corp. announced at the Consumer Electronics Show in Las Vegas that it will ship computer chips embedded with WiMax receivers beginning this summer." The announcement was met with optimism by broadband provider Rogers, "That's a very favourable sign for WiMax," said David Robinson, vice-president of new business planning for Rogers Wireless. The article goes on to say "the technology is expected to be able to deliver Internet speeds of about 15 megabits per second within three kilometres of a transmitter." This sounds very promising, I hope the Disney folks invest in a few transmitters... my blogging was stymied last week by a bad NIC card and no WiFi, at least at Coronado Springs!
Posted by greatbiggeek at 12:29:00 PM

Queen of England a Wii Addict?

The People is reporting that Prince William's girlfriend, Kate Middleton, gave a Wii for Christmas and the device has caught the attention of Queen Elizabeth herself. The Queen apparently saw William playing and begged to join in, "She played a simple ten-pin bowling game and by all accounts was a natural." The 81 year old monarch is by all measures a geek, constantly upgrading her cell phones, having over 100,000 songs on her iPod, her own e-mail account, and recently acquiring a Blackberry. Maybe this is why she refuses to give up the crown... what's your high score Charles?
Posted by greatbiggeek at 7:41:00 AM

The CBC is reporting that GM CEO, Rick Wagoner, in the last keynote address at the 2008 Consumer Electronics Show made some big predictions for the not so distant future. "It is critical to our business destiny and our obligation to society to develop alternative means of propulsion to meet the world's demands for our products, which is growing at a very rapid pace." said Wagner. According to the report "GM's OnStar in-vehicle communications and monitoring system will soon introduce applications that can be activated over a cellphone. In the "very short term," subscribers to the service will be able to unlock or even start their vehicles remotely with their mobile device." In addition, Chris Urmson, Carnegie Mellon's man behind "Boss" the DARPA Urban Challenge winner said "we expect a fully autonomous, self-driving car to be on the road in the next decade."

I expect that this prediction is fairly safe. Ten years ago I read of a semi autonomous vehicle that drove across country and managed nearly, I believe, 90% of the driving. With the success of "Boss" and other contestants in the completely autonomous DARPA driving challenge, it stands to reason that another decade will mean enough advances to bring the technology to the masses... think I'll call Johnny Cab!
Posted by greatbiggeek at 3:45:00 PM

This YouTube video was sent to me by Chris, who will someday provide some guest posts... ;-)
This heads up display using a Wii remote really has to be seen to be appreciated. the video's creator, Johny Chung Lee, does a great job of demonstrating the project, doesn't hurt that Johny is associated with Carnegie Mellon University either.
Posted by greatbiggeek at 11:51:00 AM

Busy this morning doing laundry and paying post Christmas bills. I have nearly 800 photos to go through and many thoughts about our trip that I want to process, thinking that I might use Utters and compile the thoughts as a podcast. Will definitely be using Flickr to post some of the best pictures. I'm aiming to have this done by Friday and until then will be posting in the traditional GBG fashion as time permits. A new post is coming as soon as I get organized... Terry.
Posted by greatbiggeek at 11:30:00 AM

CNET runs down their top 30 picks for the "Best of CES" award at the Computer Electronics Show (CES). Check out the Belkin FlyWire,Alienware curved display, and Bug Labs Platform!
Posted by greatbiggeek at 7:38:00 AM

Polaroid goes back to instant prints

Polaroid is planning to go back to printing pictures with the upcoming release of a portable printer for images captured on cell phones and digital cameras. According to CNN the printer connects to your camera via Bluetooth or USB, and requires less than a minute to produce a 2-inch-by-3-inch picture. I guess at $150 for the printer and about $0.40 per sheet there will be some appeal, but I think I'd prefer just to e-mail my photo's or post them to Flickr...
Posted by greatbiggeek at 8:04:00 PM

Sitting in the Orlando International Airport waiting for a flight to Boston. This is the first WiFi hotspot I've had in a week and I'm anxious to get caught up on the blogging. Too many things to discuss, need to sort out my thoughts and put together some vacation posts. Until then, look who I ran into in Florida! 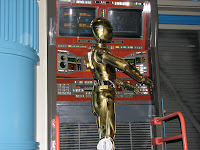